With the online media reigning over other publishing verticals, questions, like does newspaper advertising work, might often cross one’s mind. It’s not easy for newspapers to build a strong reputation at the drop of a hat. Therefore, no newspaper will have advertisements that would diminish the value of the periodical. At the same time, since a lot of the newspaper’s revenue is generated by advertisements, they cannot do without them either. So whatever is advertised in a newspaper has to be authentic as well as effective for the company that’s posting an ad in it.

For many people, newspapers just consist of heaps of information presented in the black and white monotones. While that is not entirely incorrect, there is definitely more to a newspaper than just that. Advertisements form a huge part of the daily newspapers and it still seems pretty effective. For an example, we all know how the jewellery shops advertise their latest collection for the entire week before Valentine’s Day. This is a great marketing strategy as couples who look for gifting ideas are easily captivated by this advertisement. However, for an advertisement to be successful, a lot of things have to be considered and planned accordingly. Would this advertisement posted by the jewellery shop be as successful if it was posted after Valentine’s Day? The answer is no. It worked because in the previous instance need met want. While in the second instance there was no need for the couples to look for gifting ideas. 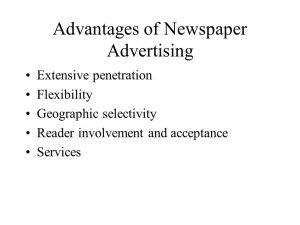 Therefore questions like who can be the possible target audience, how can the particular product being promoted be helpful to them and why would people want to purchase it, are ones that advertising agencies should ask themselves in order to judge the fate of an advertisement. If all these parameters are met successfully, there is no reason to doubt the efficiency of a newspaper advertisement.So why use newspaper advertising? India has a vast reader base that religiously follows the newspaper. Not only are there some great national periodicals but also regional dailies. For the promotion of small business organisations, these regional dailies are the best bait. They directly communicate with the local people who might find an interest quotient in the advertisement and thereby act upon it.

It’s crucial for the ne wspaper ad to have an element of excitement in it. Even if the content is not  very fascinating, it should not be presented in dull or drab manner. The ad should be shaped in  such a way so that the person seeing it feels compelled to do something about it. In short, it should  bring out the desired outcome.Also, a lot of attention should be paid to the placement, size, and  type of the ad. While some content might need a little embellishment to go with it, other content  might not. So before spending money to put up an ad, considerable thought must be put in the  type of advertisement the company wants to pitch in for. At releaseMyAd, all these factors are  looked into thoroughly so that clients reap the benefits of investing here.

Promote your Brand in the best Sports Magazines of India with...