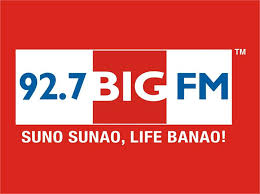 Over a rather short period of time, Big 92.7FM has produced some of the best radio shows, and as a result, generated immense popularity for their brand. Since 2006, they have expanded exponentially, spreading to over 45 cities including the top metropolitans, 1000 towns and 50000 villages as of today. They also boast of a weekly listenership of 4 crores. They also have the unique distinction of winning a number of national and international accolades and awards for their work. As a result of their numerous successes, Big FM has emerged as one of the most prominent advertising platforms.

Among many others, there have been a few highlights in terms of advertising campaigns on Big FM. The advertising campaigns by Colgate, leading Toothpaste Company, Parle G, a famous brand of biscuits by Indian food giants Parle, and Nokia, Finnish mobile phone makers are among the feathers in the cap of Big FM. Big FM was approached by Colgate in an attempt to improve their public image and magnify the emotional pay-off on the customers. Colgate had the agenda of targeting their focus group, the youth in order to renew their brand promise. What resulted was a singing competition where the big honor was the chance to perform on the big stage with popular Indian vocalist, Sonu Nigam. The ultimate prize, however, was the opportunity to record a song with Sonu Nigam. The auditions were held over the medium of the radio via a contest, and a total of 75,000 people took part in the contest. The five lucky winners got to perform with Sonu Nigam live in 5 back to back concerts, with each concert selling more than 10,000 tickets.

Another astounding advertising venture hosted by Big Fm involved Parle G. Parle G was marketed as a healthy variety of biscuits, full of nutrients and vitamins that enrich your mind and body, developing mental prowess and physical stamina. Parle G’s campaign aimed to reinforce these promises. The resultant campaign was a contest that tested the stamina and mental ability of Radio Jockeys (RJs). The campaign was held in Chennai, Mumbai and Hyderabad. This effort by Big FM enjoyed huge success, resulting in an entry in the Guinness Book of World Records for extraordinary effort for the Chennai leg of the marathon.

After enjoying huge waves of success and proving their advertising capabilities to the public and to organizations, Big FM found their next big clients in Nokia. This Finnish company that had enjoyed immense fame since the inception of cellular phones had recently partnered up with Kolkata Knight Riders, a team from Kolkata that featured in the Indian Premier League. In an avid attempt to generate buzz among the citizens by giving them a small taste of IPL action, Nokia had decided to run a campaign on Big FM. The resultant campaign featured a bowling machine that was placed in various malls across Kolkata. The bowling machines ejected balls in a similar fashion to how a real cricket bowler delivers the ball. This was the first time that bowling machines featured in Kolkata for recreation. The competition invited volunteers to face the bowling machine as batsmen, and in the event that the contestants managed to hit each ball for a boundary or an over boundary, they received as a token branded merchandise. The campaign was a huge hit in Kolkata, a city known for housing a large number of sports enthusiasts.

Big FM had yet again proved themselves to be more than an able platform for launching large scale ad campaigns, and delivering more than satisfying results. It is possible for you to launch an ad campaign for your own organization on this prestigious platform. releaseMyAd, an ad agency which gives you the best deals for booking air time on Big FM. What’s more, releaseMyAd can also aid you extensively in the process of planning and designing your ad campaign with stellar creative production services. Since most ad campaigns feature a jingle, which is a catchy song that explains the service/ product, releaseMyAd has partnered up with Jingle India, one of the most famous jingle composing firms in India. Through releaseMyAd, you get access to India’s finest jingle composers. Through us, you can get access to a wide variety of creative samples. releaseMyAd will also help you with expert consulting. For any queries, you can mail us at radio@releasemyad.com , or call us on this number: 09830688443.